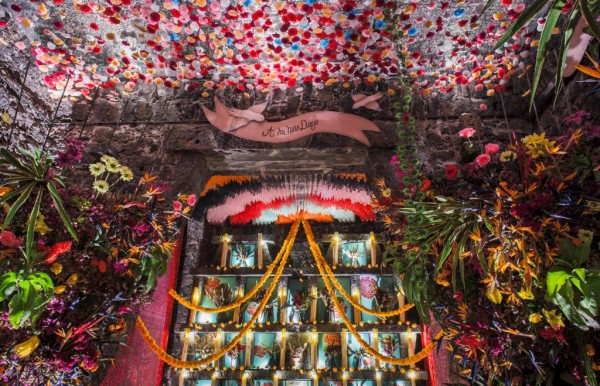 (Photo : OMAR TORRES/AFP via Getty Images)
Picture of an offering made as part of a collaboration between French designer Jean Paul Gaultier and the Anahuacalli museum in honour of Mexican muralist Rivera, painter Frida Kahlo and Mexican culture for the upcoming Day of the Dead, at the museum in Mexico City on October 25, 2019.

Vanessa Guillen, Adam Toledo, and the COVID-19 victims will be honored in a "Dia De Muertos" or Day of the Dead exhibit at the National Museum of Mexican Arts in Chicago, Illinois.

Entitled "Dia de Muertos - A Time to Grieve & Remember," the Day of the Dead exhibit will be open to the public from September 10 to December 12, 2021.

Located in the Pilsen neighborhood of Chicago, the National Museum of Mexican Art is a museum that features Latino, Mexican, and Chicano art and culture.

READ NEXT: Mexico: Miracle Baby Found Alive in Morgue After Being Declared Dead Has Died

A special ofrenda in the first room that visitors see will feature photos of 200 COVID victims submitted by their loved ones to the museum over the past weeks, ABC7 Chicago reported.

National Museum of Mexican Art chief curator Cesáreo Moreno said he and his staff were putting the final touches on the exhibit this week.

"Mourning is telling people's stories," Moreno stressed, adding that the Dia de Muertos is a "wonderful way" to deal with the pandemic and "the loss we have had over the last two years."

Moreno noted that seeing the photos of at least 200 faces of those who died from the virus "was really intense, like no other year."

Vanessa Guillen, Adam Toledo, and Ofelia Lara will also be featured in the Day of the Dead exhibit. Guillen is a Mexican American soldier who tragically died when another army member killed her after reporting sexual abuse in a Texas army base.

Adam Toledo was a 13-year-old Latino boy who died after being shot by a Chicago cop last March. Footage released earlier by the Civilian Office of Police Accountability (COPA) showed that Eric Stillman, the police officer who shot Adam Toledo, opened fire while the Latino teen already raised his hands.

Meanwhile, Ofelia Lara, a Latina, is a Chicago resident who died of natural causes.

After the Day of the Dead exhibit, the National Museum of Mexican Art will host Día de los Muertos Xicágo, a festival that will also be open to the public on October 30.

The museum is inviting the public to sign-up online to build an ofrenda at the event that will take place at Harrison Park behind the museum.

What is Dia De Muertos or Day of the Dead?

Dia de Muertos or Day of the Dead is not simply a Mexican version of Halloween. Instead, it is Mexico's celebration of life and death.

The Dia de Muertos originated several thousand years ago with the Aztec, Toltec, and Nahua people who considered mourning the dead disrespectful.

The celebration's centerpiece is an ofrenda or altar built inside residences and cemeteries. The altars are meant to welcome the spirits back to the realm of the living.

Thus, the altars are loaded with offerings such as water to quench the thirst after a long journey, food, photos, a candle for a dead relative, and even small toys if one of the family members who died was a child.

The Dia de Muertos celebration takes place on November 1 and 2 - the All Saints' Day and All Souls' Day on the Catholic calendar. Although related, these annual events differ significantly in traditions and tone.

WATCH: What is Day of the Dead? - From National Geographic