Brian Laundrie's death has finally been solved. The fiancee of the deceased Gabby Petito, who is also a vlogger, has been confirmed to have died by suicide. 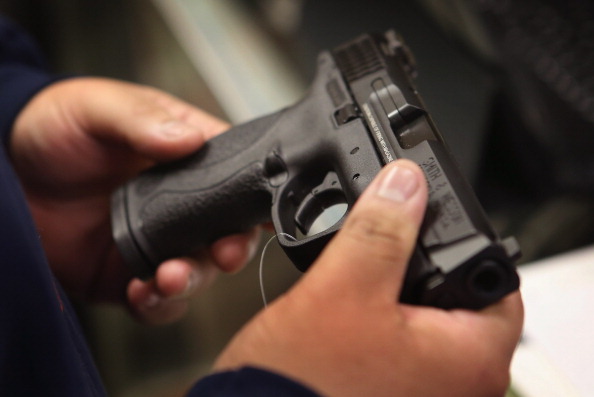 (Photo by Scott Olson/Getty Images)
A customer shops for a pistol at Freddie Bear Sports sporting goods store on December 17, 2012 in Tinley Park, Illinois. Americans purchased a record number of guns in 2012 and gun makers have reported a record high in demand. Firearm sales have surged recently as speculation of stricter gun laws and a re-instatement of the assault weapons ban following the mass school shooting in Connecticut .

According to CNN's latest report, Steven Bertolino, the main attorney of the Laundrie family, claimed that the YouTube personality shot himself in the head.

"Chris and Roberta Laundrie have been informed that the cause of death was a gunshot wound to the head and the manner of death was suicide," announced Bertolino via New York Post's latest report.

He added that Chris and Roberta Laundrie, the parents of Brian, are still mourning their son's death, hoping that the final autopsy would bring peace to both the Laundrie and Petito families.

Back on Sept. 19, the remains of Brian's fiancee were found in Wyoming after she went missing on Sept. 1. After that, the guy's body was then discovered in an area of Carlton Reserve on Oct. 29.

1. Brian Laundrie murders his girlfriend and the police are somehow unable to find him. He is able to evade capture and commits suicide.
2. Kyle Rittenhouse murders two people and is acquitted.
3. An awful video is released of Zac Stacy beating his ex. Arrested within 24 hours.

Now, a forensic anthropologist studied Laundrie's remains and confirmed that he did indeed kill himself. However, it is still unknown where and how the man got the gun he used.

As of the moment, the FBI hasn't released any detail about the weapon. Meanwhile, Richard Stafford, the family lawyer of Petito, said that Gabby's household members accepted the suicide determination.

There is a lot of evidence to suggest that Brian Laundrie got a mandibulectomy to fix his underbite. The mandible portion was planted in the CR with his belongings. He was seen in Texas in disguise with the exact same suit and shirt recently. @FBIDenver @BrianEntin @Nerdy_Addict pic.twitter.com/bwRi8wm3xo

However, they would still want the Federal Bureau of Investigation to continue the investigation, especially since the death of their beloved daughter still remains a mystery.

Who Are Gabby Petito and Brian Laundrie?

The deaths of Brian Laundrie and Gabby Petito made huge headlines for the past few months. Both of them are popular in the United States because of their vlogs, which revolve around their van life journey across America.

However, their happy story was suddenly met by a tragedy after Gabby disappeared and was found dead. At first, authorities suspected that she was killed by her fiancee. But, it seems like the investigation would still move forward after the final autopsy of Brian was revealed.

Right now, many questions still remained unanswered. People are asking if any charges would be filed in connection to the deceased, engaged couple, as reported by News Channel 8.