Mexico farmers are concerned about meeting the demand after state funding cuts.

NBC News reported that Mexico's most productive farmers fear that they could not meet the increasing demand for imports of the white corn used for tamales and tortillas due to state funding cuts.

Cesar Quezada, a farmer who produces corn, meat, and chicken, said that the new policies are punishing farmers with plots of more than ten hectares. Meanwhile, under President Andrés Manuel López Obrador, the agricultural budget has been cropped by a third with subsidies for larger farmers, who have two-thirds of corn production, entirely eliminated. 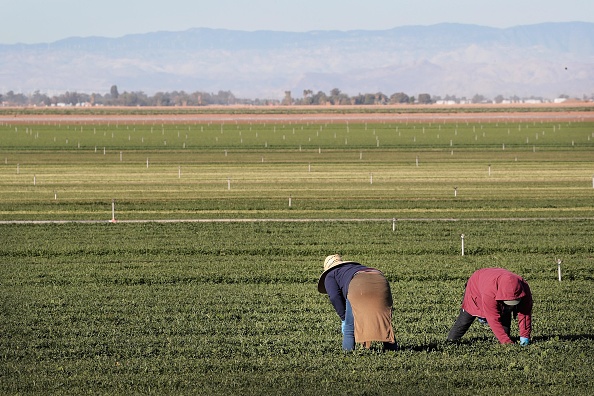 (Photo : Scott Olson/Getty Images)
Border Wall Funding The Focus Of Continued Partial Government Shutdown EL CENTRO, CALIFORNIA - JANUARY 25: Farm workers pull weeds in a field of organic spinach growing near the U.S.-Mexico border on January 25, 2019 near El Centro, California. The U.S. government has been partially shut down, leaving many government workers without pay as President Donald Trump battles congress for $5.7 billion in funding to build walls along the U.S.-Mexico border to prevent people from illegally crossings into the United States. Today President Trump agreed to end the shutdown.

Although Mexico is historically self-sufficient with white corn, José Cacho, vice president of Grupo Minsa, warns that the changes could force Mexico's second-biggest corn flour miller to buy imported supplies, which they didn't do for years. Cacho said, "There's a risk we won't be able to source enough." He referred to the 800,000 tonnes Minsa buys yearly, adding that Minsa had not bought imported corn for several years.

The president's office, as well as Mexico's agricultural ministry, have not responded to Reuter's request for comment. But the government says it considers all farmers. Last month, the agriculture minister said it must prioritize the most vulnerable rural regions with limited resources.

However, the consultancy sees the overall corn crop of Mexico by 2024; López Obrador's last year in office, only an inch up by about a million tonnes. The rate is considered far short of 2.5% of the demand growth of a million tonnes yearly.

The US Department of Agriculture (USDA) released data of the second round of its COVID-19 aid for farmers last month, including an estimated $3.5 billion for corn farmers, the American Farm Bureau Federation said.

According to Business World, the US Congress and President Trump have approved an estimated $61 billion of cash payments and other support efforts for farmers since late 2018. The farmers from two main programs benefited from the costs: those who aimed to cushion losses due to trade wars and the other in response to the COVID-19 pandemic.

Mexico is the top destination for US corn, with yellow corn imports of $3 billion yearly. In the 2019-2020 season, the implications would rise by 5% to 16.2 million tons, the agriculture ministry projection shows. On the other hand, white corn will hit 20%, but with lesser volume. In 2019-2020, the USDA estimated corn supplies to Mexican buyers at 18.3 million tons.

Rogelio García, a corn and sorghum producer from Tamaulipas in northeastern Mexico, said, "We are selling corn at an international price as we compete... directly with Minnesota and Ohio."

Latinas Still Have the Highest Unemployment Rate Amid Coronavirus Pandemic

US Companies Help Push Down the Unemployment Rate in August